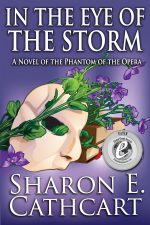 Hello, everyone.  Today’s sample is from the award-winning third book in my Seen Through the Phantom’s Eyes series, In The Eye of The Storm.  The narrator here is one of my favorite characters, Gilbert Rochambeau.  Enjoy!

I was more than a servant to both of them. Erik talked to me of his life in Persia, Russia and other far-off places. It was from him that I developed a previously dormant interest in art and literature. That Erik enjoined me to escort Claire to museums only fueled me further. I studied the sculptures, sketches and paintings closely so that I might understand color, proportion and light.

As I said, I was also Claire’s majordomo. This position allowed me to spend time in her company whenever Erik was unavailable. He still grew distressed in public at times, so these opportunities were many. I would dress with particular care whenever we went out; I would never forget how Claire’s eyes glowed the first time she saw me properly dressed, barbered and shaven. Erik’s elegant appearance was my inspiration, but Claire’s approval was my guiding light. I disliked admitting this to myself, but it was the truth nevertheless. I would not shame her by escorting her in anything less than the best-dressed state. Perhaps, I thought, some other woman might look upon me with similar admiration.

Erik was as vain as any dandy; I learned a great deal from his particularity. My razor was stropped so sharp that it could split a hair, just the same way that I maintained Erik’s. He taught me how to tie my cravat in perfect folds and insisted that I be fashionably attired. He made sure that all three of us were perfectly turned out; so far as Erik was concerned, we were a reflection on him.

My warm little suite off the kitchen, chosen so that I need not negotiate the stairs several times a day, was an oasis. I would often wake to hear Claire in the kitchen making a pot of chocolate or toasting bread for breakfast. Our household was not shy of one another; she was usually in her wrapper with her hair loose. I often hurried to dress so that I might greet her. She would smile, wish me good morning, and share whatever she prepared. Sometimes she would touch my arm; the gentle caress was like fire to my love-starved skin.

The mornings when her lips were swollen and her throat red from Erik’s kisses and love bites were the times that I envied him most. I often had to retire hastily to my room so that Claire would not see the physical response my body made to my imaginings; it was bad enough that such longings haunted me in the nighttime. I dreamed of making love to her far more often than I liked to admit. I ached for her in ways that I had never before imagined.

I am somewhat ashamed to confess that I occasionally slaked that longing in the brothels on Place Pigalle. Sometimes, I would even close my eyes and pretend that it was Claire in my arms instead of Mimi or Lulu. I doubt that the girls in those houses cared one way or another, so long as I left the right number of francs on the bedside table

One thought on “Sample Saturday: “In The Eye of The Storm””